A Case Study of the NIR Center

For a new lab development with a mission to accelerate innovation and prioritize sustainability, it’s fitting that the structure itself should embody these values. Summit Development’s New Industrial Revolution (NIR) Center is a 10-story commercial biotech laboratory building and one of Portland’s first proposed projects under the new building code for Type IV-B mass timber construction. Breaking free from the mold of “business as usual” (BAU) building methods, NIR Center is an innovative example of how mass timber can be hybridized with concrete and steel to reduce environmental impact while remaining cost-effective and decreasing the duration of construction.

The project team established embodied carbon reduction as a key net-positive impact area and aspired to significant reductions in the carbon footprint of the building materials. Incorporating mass timber was a first step to achieving this, but consideration of embodied carbon permeated all aspects of the design process. SORA Design Group led the team in performing a Life Cycle Analysis (LCA) to quantify the environmental impact of the proposed design and found that NIR Center will reduce its embodied carbon footprint by 39.3% compared to a BAU building.

Early in concept design, the team created a profile for a baseline BAU building with a concrete structural system, including post-tensioned concrete floors. With input from the CM/GC, we found that the proposed hybrid mass timber and steel composite system outperformed the BAU building on schedule and was more cost-effective than other mass timber systems. The BAU baseline was also used as the benchmark in calculating embodied carbon during the LCA process.

While the building’s structure is predominantly mass timber, concrete is still required below grade (parking garage, foundation) and as a lateral topping slab at every floor. With guidance from Holmes Structures, we explored opportunities to reduce the footprint of the building’s concrete by substituting Supplementary Cementitious Materials (SCMs) for up to 45% of the cement in the concrete mixes. SCMs, commonly composed of byproducts such as fly ash or slag, offset the need for energy-intensive cement and substantially reduce the footprint of concrete.

By using mass timber, reducing cement content, and considering embodied carbon when selecting high-impact components like insulation, the proposed design reduces embodied carbon by 39.3% compared to a baseline building. This far exceeds the LEED credit benchmark for embodied carbon reduction and is on par with the 2030 Challenge’s current embodied carbon goal. Unsurprisingly, the decision to use mass timber was the most important factor in reducing carbon. It resulted in a direct reduction of 38% by displacing the need for concrete, but also contributed to indirect reductions such as smaller foundations (due to a lighter building) and less reinforcing steel. In total, mass timber accounts for 69% of our total embodied carbon savings. 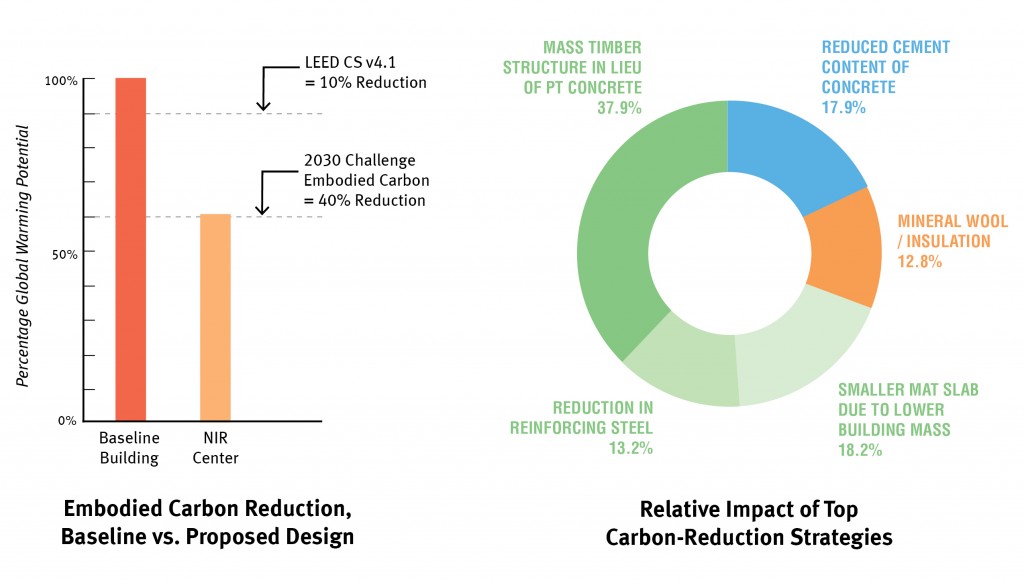 The proposed design achieves a savings of approximately 3,024 metric tons of CO2 when compared to the BAU building. To put this in perspective, that’s the equivalent of removing 630 cars from the road or powering 490 Portland homes for a year!

As an example of balancing schedule, cost, and sustainability goals, the innovative structural system used on NIR Center has potential for adoption across a broad range of project types. Construction Type IV-A and IV-B buildings are especially good candidates for this approach; because much of the mass timber in these structures must be covered for fire protection, project teams can prioritize cost-effectiveness and not dedicate project dollars to more expensive mass timber systems meant to remain exposed.