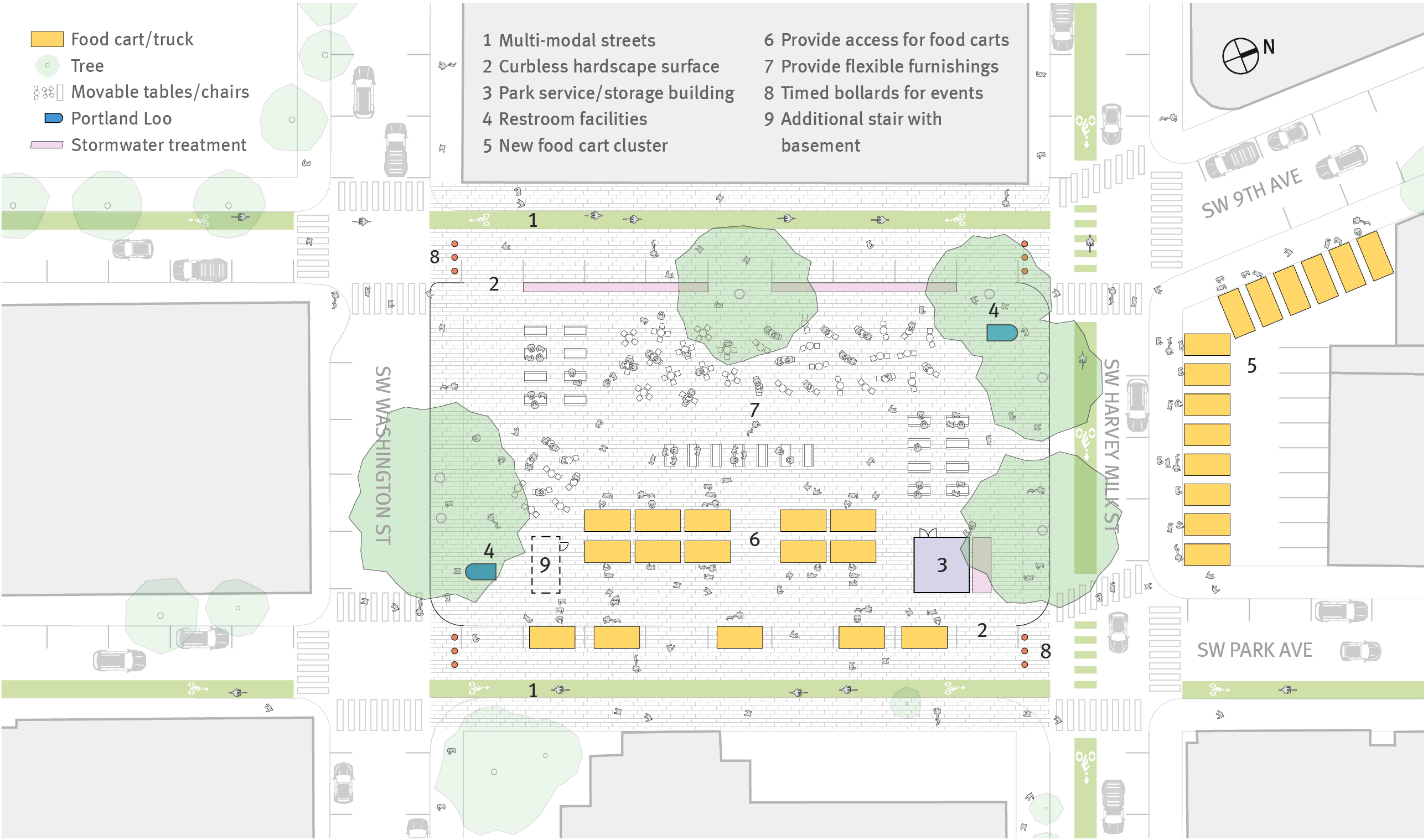 The 2018 closure of O’Bryant Square because of structural issues left a gaping hole in Portland’s West End. The award-winning city park opened in 1973 as a lively plaza with underground parking, but later became an infamous drug spot. As food carts sprouted in nearby surface lots in the 2000s, O’Bryant enjoyed a renaissance as a lunch spot — one sorely missed by businesses and tourists in the downtown district. Hennebery Eddy has a particular connection to the square: Our second-floor studio looks directly over it. We convened a pro-bono group of citizens, business owners, community leaders, and designers to develop a vision for the square in the hopes that it won’t languish for years as a vacant eyesore.

The vision outlines ideas for reopening and revitalizing this public space with the city’s long-term growth and potential in mind. Overriding principles are consideration of the urban context, including the existing North and South Park Blocks, the proposed Green Loop, and planned property developments; preservation of food cart culture; civility and equity for all potential park users; and an interim solution to safely open the square ASAP, in a way that supports a more long-term plan.

An interim solution to immediately reopen the park includes necessary structural reinforcement, removal of the old bus shelter to open up the southwest corner, and possible space for food carts.

By removing damaged, unused, or confining features of the current square, an interim solution would set the stage for a variety of future uses. Flexibility and adaptability are key tenants of the urban park design that would allow the space to evolve as needed, inspired by the open piazzas of Europe that feature minimal built infrastructure. Another key concept is that of being “Portland’s Dining Room” — a nod to both the food cart scene and a separately proposed “Culinary Corridor” that would see carts occupying parking spaces along SW Park and SW Ninth, as well as to the park’s big sister to the south, Pioneer Courthouse Square, aka “Portland’s Living Room.” By also incorporating amenities like restrooms, trash/recycling receptacles, and moveable furniture, future iterations of the park could actively welcome the public into the space.