At one of the most trafficked corners in Portland – the intersection of Martin Luther King Jr. Blvd. and Couch, just past the Burnside bridgehead – sits a three-story, wood-framed structure with a brick exterior. The building has anchored this spot for more than 100 years, but only recently has it become a destination. With much fanfare, the KEX hotel opened here in November 2019, offering a unique experience that was many years in the making.

Hennebery Eddy designed the rehabilitation and adaptive reuse of this historic building, which formerly housed The Vivian apartments, into a hostel with a ground-floor gastropub for the Icelandic brand KEX and local restaurant group ChefStable. Guest rooms on the second and third floors offer a variety of private and shared accommodations, while the open ground floor hosts casual dining and a constant stream of musical acts — a key focus of the KEX model. The hostel also features a courtyard with exterior seating and a stunning red neon sign, a rooftop bar and a community gathering room – Gym & Tonic – and conveniences for travelers like a sauna, shared kitchen and laundry rooms, and bike storage.

Clackamas Fire District Station 16 received an Honor Design Award from the Fire Industry Education Resource Organization (F.I.E.R.O.) during the organization’s annual conference in Raleigh, North Carolina. The new fire station is one of two designed for the district by Hennebery Eddy that opened in the spring.

Kids stared up in wonder at the shiny red fire engines, positioned in a striking “Z” shape that filled the 80-foot apparatus bay. The firefighters looked pretty excited, too, as they showed off their new digs to the more than 100 community members who gathered for the ribbon cuttings and open houses.

Other than the shift from a soaking-wet, gray winter day to a bright and breezy spring afternoon, the scene was similar for both events at Station 16 in Oregon City and Station 19 in Damascus. These two projects, funded by a Clackamas Fire District bond, represent a meaningful investment in each community and stand as a beacon of resilience and pride. Naturally, it was a time to celebrate.

In 2018, Hennebery Eddy placed No. 31 on the Architect 50 – a ranking of the top 50 firms in the country – bolstered by our strong showing in the sustainable design category. Our net-positive philosophy and design approach landed us at No. 11 in that category.

We aspire to design net-positive solutions through healthy, efficient, and adaptive spaces that are responsive to our clients, the environment, and the people who use them.

To recognize our project teams’ achievements in healthy, efficient, and adaptive (HEA) design, 2018 also saw us launch an “HEA Net-Positive Awards” program for projects that recently completed design or construction. The 12 entries ranged in size, market, and style and featured net-positive stories that included innovations in daylighting, careful use of mindful materials, historic preservation, and impressive energy use reduction. A panel of five judges from among our staff honored the following projects.

Hennebery Eddy’s rehabilitation of the c.1939 Chapman Hall at the University of Oregon garnered a 2018 DeMuro Award from Restore Oregon, a nonprofit that advocates for preservation and reuse of historic structures. The DeMuro Awards honor extraordinary historic rehabilitation projects across Oregon, recognizing the creativity, persistence, and craftsmanship required by outstanding restoration projects.

Regardless of whether the City of Portland adopts a mandate requiring the seismic retrofit of unreinforced masonry (URM) buildings, the realities of a probable major seismic event in the next 50 years are sobering — with life-altering, social, financial and economic implications for everyone in the region. For many building owners, a retrofit requirement may seem financially infeasible if they lack the liquidity to pay for potential retrofits and cannot secure funding from risk-averse lenders. Though it may be months or even years before the city finalizes or implements a mandate, building owners can and should start evaluating now the potential costs of seismic retrofits to protect life and property — and whether federal, state or other grant money may be applied to offset these costs.

Design Week Portland is an anticipated annual event in the design community, bringing together architects, artists, makers, and creators to explore design across disciplines and scales. This year, Hennebery Eddy hosted our first DWP open house, giving attendees a chance to visit our studio and see our work — and explore resilient design in the built environment.

Resiliency and resilient design are increasingly part of the discussion among building owners, consultants, and regulatory organizations. Similarly, “The Big One” and disaster preparedness are gaining more attention in public discourse. We noticed a gap in the discussion within the broader design community and felt Design Week was an opportunity to begin making connections between industry experts and Portland citizens in addressing these complex issues.

Firefighters serving the Hilltop area of Oregon City will have a new fire station to call home in mid-2018. Clackamas Fire District #1 has selected Hennebery Eddy Architects, Inc., to design the new Fire Station 16, which will replace the existing 1970s facility on the same site. Currently in the design phase, the new Fire Station 16 will house up to eight fire fighters and the battalion chief, and will include a larger apparatus bay to house a new ladder truck. The 12,000-square-foot critical facility will also support district training activities. 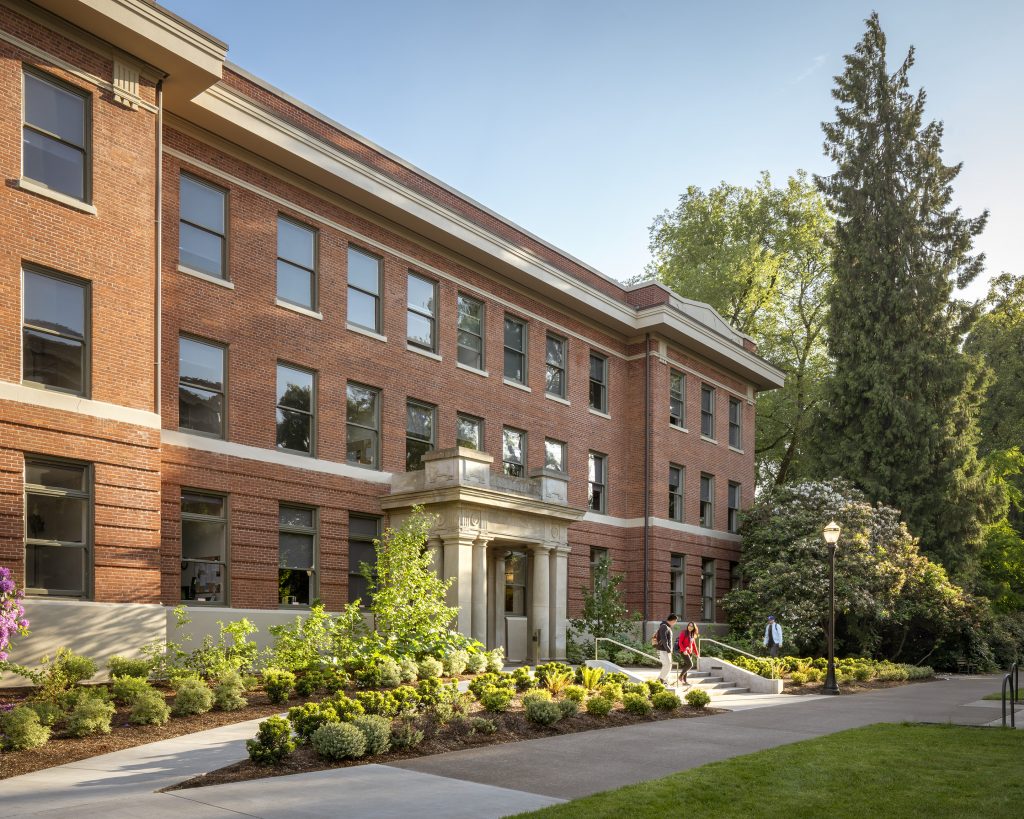